Back to all posts

A poem from ten years ago this day

On my birthday, I sometimes get into philosophical mood… Around this day of the year, it is indeed usual that something happens where I feel a new life has began in one way or the other.

At the age of 10, by an accidental meeting with another little girl, I got introduced to the local folk dance group, and that set me on a path for this life.
When I was 19, I spent my birthday in a hospital with an unusually heavy Hepatitis where the doctors said I needed to be very careful with moving, for at least a half year. A few weeks later I was on stage, touring with the dance group in Slovakia…

In 1993, I got my son as a present – two years later in January, I broke up with his father and we divorced. In the same time, my beloved Grandma, who used to sing the lullabies so beautifully, passed away…

In 2000, somehow, a very happy and productive period of my life started, overnight.

And now, without going into more details here*, I am giving myself the most precious present of freedom:

(*Note 2018 January: later on, I might go into the details and tell you much more about why this poem was born)

When I see it’s black
And they say it’s white.

When I see it’s not right
And they say it’s all fine.

It kills me when I must show
That everything is right.

“I can’t tell it to anyone,
So I tell it to everyone” –
Our friend has said it.

So I chose to LIVE.

Live a life that only belongs to me
Yet it is of all Man.

Live a life where I decide
What is true for me.

Where I am the one
Who says what I see.

Where birds have wings to fly,
Mothers to hear babies cry,
Where the children are not shy.

I belong to Life.

I belong to where laughter roars
And where lovers kiss,

And where empty promises
Are not part of the script.

Where sanity rules.
Where the Spirit calls.

I belong to no party, no club,
No church or religion,
Organization, association.

I belong to my own kind,
My only child,
My peace of mind.

I belong to my own voice.

I belong to the ever-hungry
For beauty and melody.

And probably, hopefully,
I belong to another heart.

I belong to those
Who make food with a brush,
A pen, a bow, a string, a lens.

And when I’ll have to look back
At all my years,
With eyes already closed,
The question will be asked:

Was it good, the way I belonged? 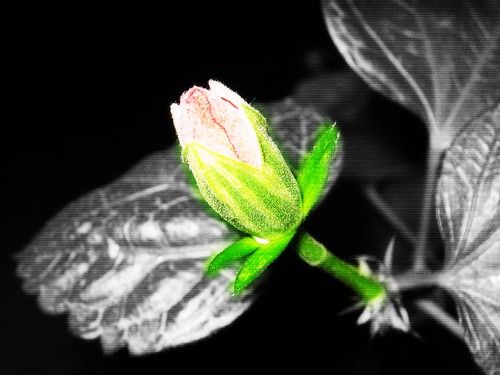 Hibiscus bud. This baby was in my room on the day when I wrote these words.